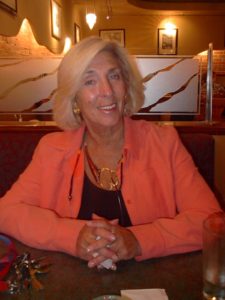 While her name is and was familiar to prominent political figures like Vice President Al Gore, Senator Paul S. Sarbanes, Congressman Steny Hoyer, C. Thomas McMillen, Governor Gerald Baliles, the late Geraldine Ferraro, the late Ambassador Pamela Harrison and numerous other local, state and national elected officials and candidates for her role in political fundraising, Arlene Berlin has never sought public recognition for her efforts and has been content to remain in the background. The only woman member of the Democratic National Committees Finance Board of Directors in the early 80s, she worked to bring donors into the Finance, Business and Small Business Councils of the party and was appointed Finance Vice Chair in 1983, which may have been an historical first.

Ms. Berlin was a partner in Communique, a DC political affairs firm based in Washington, DC and also the owner of the Watermark Gallery in Annapolis. She also served as Public Information Officer of the Capital Area Chapter of the National Association of Women Business Owners and played an instrumental role in taking the association national. One of the first women members of the National Press Club, she served as Editor of the Georgetown Crier and wrote feature articles for various publications.

Locally in the Annapolis area, Ms. Berlin was a founder and President of the Eastport Business Association and handled public relations efforts that launched the Eastport Yacht Club Lights Parade to a statewide award winning event. A contributing writer to Inside Annapolis Magazine for over six years, she also started the feature page for Spin Sheet. Continuing to assist women to serve in public office, she served as Chair of the Friends of Ellen Moyer and handled the fundraising aspects of Mayor Moyer’s first campaign.

While past the age for retirement, Arlene is currently serving as Director of Boards and Commissions for Anne Arundel County. She is a first to promote and ensure that women have a say and can make a difference. Arlene certainly knows how to provide a place for Women in leadership roles. I am honored to nominate her as an Unsung Heroine!