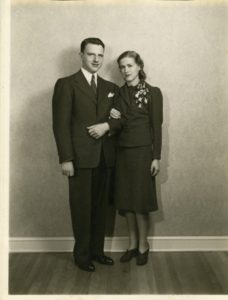 Many of us are indebted to the women who came to work in Washington, D.C. during the Great Depression. They went on to be wives of World War II soldiers and mothers of the Baby Boomers. My mother-in-law, Eleanor Mae Case Lott, was one of this vital group of pioneer women in the federal work force and first cohort of suburban moms. They are our unsung heroines.

Eleanor Mae Case was born in Lawrenceville, IL on August 10, 1917 to a farmer and his wife, Theodore and Lula Case. She was the youngest of their seven children. Her twin sister died at birth. Her family and neighbors spoke about what a high achiever she was. In 1932, Eleanor was the Illinois State champion in typing, representing Bridgeport Township High School. She was awarded the Governor Horner Trophy, a badge of honor, and a trip to the Chicago World’s Fair. Eleanor averaged straight A’s in elementary and high school, where she graduated at the age of 16 in the Class of 1934. As a sophomore, she led her high school honor roll with a 98% average. She was recipient of the American Legion Auxiliary School Award in Tracy Elementary School as “the girl voted by the student body as standing highest in honesty, cleanliness scholastic standing and loyalty.”

After high school graduation she moved to Washington, D.C. at the invitation of her older sister Cleo, starting as a GS- 1 clerk and rising to a GS- 9 administrative assistant during World War II. After the war, she joined her husband, Joseph Henry Lott, Jr. in war-torn Berlin, Germany, where he was part of the U.S. effort to restore Berlin’s infrastructure, especially food distribution. Eleanor and Joe returned to the U.S. from Berlin in late 1947 and, like many young couples who married in 1939 then were separated by military service, bought homes in the suburbs and started families.

In the early 1950s Washington, D.C. suburbs were more rural than urban. For Marylanders, Silver Spring was a small suburban community. Anything beyond University Boulevard and Colesville Road was country roads and farms. Public transportation was nil. If families had cars, there was only one, which dad took to work in the capital. Private telephones were just coming to families. Long distance calls were exorbitant. Like her peers, Eleanor had to adapt from being an independent, professional working woman to a wife and mother at home 24 hours a day with young children. Adult company during the day was limited to other moms at home and the milkman who delivered milk, eggs and bread twice a week. She was able to visit her family, still on the farm, once a year.

Over the decades, quietly and consistently she became the dependable neighbor, church volunteer, and the rock and anchor for her family. Suddenly widowed in 1981 she devoted her remaining years to nurturing her 3 children, their spouses, and especially her 6 grandchildren. She, like many of her cohort, outlived their husbands bravely and graciously facing the autumn of their years without a life partner for decadesand with all the frailties common to aging. After a tough and tenacious battle with various illnesses, Eleanor passed away on October 21, 2004 at the age of 87. She was buried next to her husband in the Lott Family Section of the United Church of Christ, Troutville, PA.