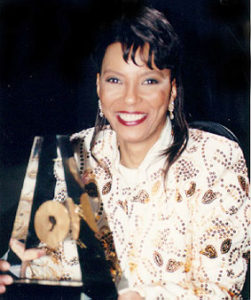 Motivational speaker, vocalist and percussionist Gaynell Colburn has been playing the drums since age three. She has used her love of music to help disadvantaged youth through the work of her Telsie B. Howard Foundation, a tribute to her late grandmother. As part of the foundation’s work, Gaynell gives hundreds of performances a year in schools, churches, and hospitals, blending her considerable musical talents with hard-hitting motivational talks that empower youth as well as adults with the belief that they can rise above adversity to achieve excellence.

Gaynell’s love for music was evident at a very early age. She began playing percussion at the age of three, on homemade drums made from canister cans that her mother made for her. By the time she was 12, she was playing percussion professionally.

At age 16, Colburn was in an automobile accident caused by a drunk driver, which left her paralyzed from the waist down. But despite the challenges and obstacles that stood in Gaynell’s path, she went on to graduate from college and later earned a Ph.D. and an M.D. certification in Health Science and Pediatric Wellness. Colburn has worked with Stevie Wonder as a percussionist on the video My Eyes Don’t Cry, and performed the music for The Cosby Show Theme, The Cosby Show and The Cosby Album.

In 1984, Colburn was named Miss Wheelchair America and in 1998, she was received the Essence magazine award for her outstanding service to the community.