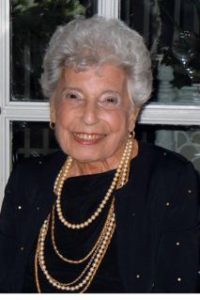 Lillian (Lil) Shevitz has been and continues to be a remarkable Unsung Heroine to her family and friends and colleagues. She is the magnet and center that keeps her extended family strongly connected. Born in 1919, she is the proud and loving mother of three children and their spouses, grandmother of five, and great-grandmother of four.

Lil’s career spanned decades working at the Washington D.C. headquarters of B’nai B’rith International, the largest Jewish organization in the world. As an assistant to both the Director of Hillel, with student chapters on college campuses around the nation, and to the Executive Vice President of B’nai B’rith, she interacted with leaders both nationally and internationally. Through her work and personal outreach, she was well-known and respected by colleagues in many countries. While working in Washington, she demonstrated her personal courage and determination when she and her co-workers were held hostage in 1977 for days by terrorists at the B’nai B’rith Building. During the ordeal, she spoke out for hostages who were being mistreated and who had special needs.

Lil is the epitome of generosity and loving care for all whose lives she has touched and continues to touch on a daily basis. She is a role model “mom” not only to her own immediate family, but to the friends of her children. She is richly deserving of her contributions being acknowledged and of her praises being SUNG!