JUST A FEW WORDS FOR MOMMA 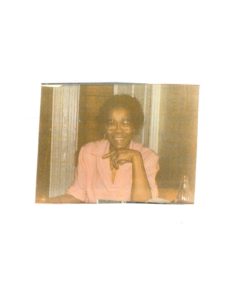 I began this eulogy for my mother, Mrs. Mildred Rigby, on March 3, 2004, during the afternoon following the evening of her death. After a brief hospital stay we (my brothers Rodney, Brian and myself) had brought her home on Friday evening, relieved that she was back in our care. I was so hurt and angry that she was gone, and that no matter how I felt she couldn’t stay.

Some time around noon on Monday the 1st of March one of the doctors had told my sister, Cynthia, that he doesn’t make house calls. Her regular internist was away attending a funeral. He had left a young associate as his on call person. I had just given my sister the blues, insistent that I talk to this person. So when Momma was admitted to the Promised Land the next day, I felt that the doctor should be severely beaten, or subjected to harsh physical punishment for not making a more concerted effort to save her life. I wanted to ruin his career. There was probably very little he could have done, but I still felt he should have come. Hopefully maturity in the profession will give him a different outlook.
Momma had lived a long life in the care of her husband, and her children, and I thought it could continue on for just a little longer. Her ability to care for herself had long ago diminished. The song in her heart and the gleam in her eyes didn’t lie. She always knew she was with those who loved her most.
The first evening without her physical presence in the house left me with an odd and unfamiliar feeling. It also seemed that the dwelling itself was unsure of what to do without her. The temperature in the house wouldn’t stay comfortable. The humidity was gone. There was the smell of a vacant empty building. Without Momma’s spirit it’s not really the same home. I wanted to offer this at her home going celebration. I simply didn’t have the emotional stability to do it.
However, if I had, this is what I would have said:

I give all honor, praise and glory to my God and to our God, Jehovah, the almighty living God, for extending to me His grace and His mercy.

I am fifty-six years old and truly a blessed man at this time. My mother is nearly eighty-three and a half years old, and only last night went to sleep in death, to join her husband, who was my father. I know his spirit waited for her in death as he had in life, and together they joined their ancestors in eternity. She had been here all of those years as my counselor, confidante, friend and treasurer. She was my guide and my spiritual compass. She directed me to the things that she thought mattered most, and tried to steer me away from hurt, harm and danger. Oh, I strayed at times, haven’t we all? But, my mother set my feet on a path that always pointed to goodness, kindness, humility, caring and compassion. At the same time she also suggested how to get along with people who didn’t have my interest at heart.

From my earliest days she would take me and my three brothers and sister behind her to Sunday School and to church. She let me know that I always had a friend in Jesus. I learned that no matter what the situation was that I was facing, I should never be too proud to look to God, humble myself and to seek His face. That I should confess any wrongs, ask for forgiveness and let it go. To look to a new beginning away from what had occurred. “He is faithful to forgive you,” she said.

My mother was born October 4, 1920. Her father died when she was seven years old. When she was nine she lost her mother, that person who always says, “Well, go on any how” or “Don’t worry, it will work out.” During her youth few Black women were able to attend school or college, and of those who did, many aspired to become teachers. Momma wanted to go to business school. She wanted to become a secretary. I heard her speak of missed opportunities and the lack of money. With the strength she found in her love of the church, her opportunity came. She proudly served as secretary of the Pastor’s Aid, and the Senior Choir #2 for many years. I suppose that’s why it became a part of her drill to her children, “Anything you want to do or be, you can” and “Don’t let other people discourage you.”

Momma was from the old school of womanhood. Intellectual pursuits were good for some people, but in her book that didn’t measure up to rearing one’s children with tender love and care. Her kitchen plaques tell it all, “My house is clean enough to be healthy, and dirty enough to be happy” and “Kissin’ wears out, cookin don’t.” On the wall over the stove was a small spatula shaped, white cutting board imprinted with My Kitchen Prayer.

Bless this little kitchen, Lord…
May the meals I prepare be seasoned from above…
Bless those who enter in.
May they find but joy and peace and happiness there in.

She cooked everyday, each meal flavored with extra love and understanding. Her rolls, biscuits and sweet potato pies are legendary. She kept a spotless house. She washed tons of clothes and hung them in the sun to dry. She ironed everything from shirts to pillowcases, while listening to the old radio programs and gospel shows. Plus from time to time she magically turned a hard head into a soft behind.

One time when money was tight, she worked at the Fish Laundry on Pennsylvania Avenue. There were days, from time to time in the midst of girl talk, Momma said, when folks had told her, “Why don’t you go here or there. If I were you, I would do this or that.” She said her response was that she would not risk doing anything to cause her children to have to hang their heads in shame. Momma spent many a year mending snags, holes and tears in our “blue jeans”, and then when I was in high school, she graduated Carver High School with her second high school diploma, this time in Dressmaking. I
remember, in my last year of high school she instituted “every man for himself” Saturday evening dinner.

Momma set the greatest example a mother could set for her children. She has, in my life, been a standard by which I have judged other mothers. I have also measured what I like in women by what I saw in my mother. My mother, Miss Mildred (nmn) King, married my father on October 4, 1938, and the union lasted until his death on May 17, 2002. That was sixty-three and a half years. Those ol’ timers had God, a special kind of glue and each other. She was the woman mentioned in Proverbs Chapter 31 of the Holy Bible. Who can find a virtuous woman? For her price is far above rubies. Proverbs also tells us that a man who finds a wife finds a good thing. Daddy hit the jackpot. I say without fear of contradiction, she lived one life. She had her husband and her children. There’s a special award for women who do that. It’s called God’s Medal of Honor. I won’t elevate my mother in death beyond what she was in life, but “A woman that feareth the Lord, she shall be praised.”

In the late afternoon of her life Momma said, “One mother can take care of five children. How come five children can’t take care of one mother?” A smile and a great deal of pride prove she was wrong. It makes my heart feel glad that love and concern sometimes caused us, her children, to feel anger with one another over what was best for her care.

I thank God I was with her, in her very presence, flesh to flesh, in sound mind and body, when her spirit left to take it’s seat on the Ship of Zion. My ear to her breast I heard the last beats of her heart.

Everyone should die accompanied by someone they love, and who loves them.

I’m glad her choir robe is beside her. I know she’ll need it when she gets there. I will always remember Momma happily singing with the choir in her church. I cannot recall a period of time from my youngest days absent of Momma praying, attending church, or singing her favorite gospel songs and hymns. I know she now has her Golden Diadem, and she’s singing with the Heavenly Chorus.

A the funeral service, I said to her, into the open air, as she lay still and at rest, her skin shining and covered in pink and pearls, that I would strive to continue to be what she had hoped I would be and what I wanted to be… as close to what we together had sought for my life. I recognize that her spirit had long since crossed the Jordan River, and had entered into God’s Book of Life, and that it wasn’t really “Momma” I was talking to. But until that vessel that I know as Mildred K. Rigby was gone from my sight I could say anything to her I desired.

At the cemetery I looked down into the emptiness waiting for her beneath the lowering device. I could see the concrete lid of the vault holding my father’s remains. The sun had decided not to shine. The air was chilly. There was no breeze. Dampness hung in the air. The ground was wet and soggy, from the road to the gravesite itself. Such a sorrowful moment. Did the earth know she was coming? … I felt, “You’re together now forever. Your jobs have been well done. May you now, Rest in Peace.”

As we drove along the road leaving the cemetery, I looked over and saw her beautiful white casket…painted in lovely pink roses and lush green foliage, lowering into the ground. It was such an immediate understanding of why it never takes place in the presence of the family. I felt such a final conclusion to her physical presence in my life. It has now opened a door and lifted her spirit to a more lofty existence in me.

On March 24, 2004 I watched the presentation, by President George Bush, of the Congressional Gold Medal to Ms. Dorothy Height, President of the National Council of Negro Women. It was a spectacular accordance with an abundance of astounding accolades addressed to Ms. Height. But there are so many Black females… mothers, sisters and daughters who have never reached the political notoriety of that level. Many of them stood in the background and simply supported husbands and children. They shaped the family, the rock of our community. And I thought, “But, who will celebrate them?” And then one of the many women who have been mentored by Ms. Height said, “African-American women seldom do what they want to do, but they always do what they have to do.” In that statement I was pleased that she had mentioned Momma. I could still love her, but now I could let her go. You see, Momma was an African-American woman who had done all of those necessary chores, and had also accomplished those things that pleased her heart.

So today and forever she will be in my memory and in the midst of my heart and soul.
She is now at peace and so am I…I am at peace with her soul and her spirit.