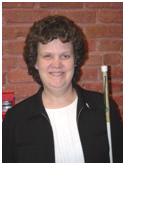 For many years now, Patricia Maurer has introduced the philosophy of the National Federation of the Blind (NFB) to thousands of people around the State of Maryland and abroad through countless speaking engagements and numerous tours of the National Center for the Blind. As Director of Community Relations, a position she has held since 1988, Patricia responds to many telephone, letter, and email inquiries that come to the National Center for the Blind. In addition, Patricia coordinates some of the national activities regarding Braille literacy and childhood education for the blind.

In 2005, Patricia began serving as the Director of Reference for the Jacobus tenBroek Library, located in the NFB Jernigan Institute. In this capacity, she continues her work of educating individuals and groups. A member of the NFB since 1968, Patricia has served in many capacities. In 1985 she was elected to serve as Treasurer of the Greater Baltimore chapter of the National Federation of the Blind and continues in that capacity today. In 1979, she was appointed as a member of the Affiliate Action Committee for the National Federation of the Blind.