(July 12, 2021) While women were fighting for suffrage in Maryland’s towns and cities during the 1900s, women in rural Garrett County were doing the same.

This year, the MWHC was proud to partner with AAUW (American Association of University Women)-Garrett Branch to celebrate the accomplishments of Western Maryland’s valiant women at the annual Victorian Chautauqua in Garrett County’s Mountain Lake Park.

On July 10 and 11, Executive Director Diana Bailey and Treasurer Bea Dane were on hand to share stories about those western Maryland suffragists. The names and work of many of these women came to light during 2020 when MWHC volunteers embarked on a yearlong research project that sought out the names and stories of Maryland’s sometimes-unknown suffragists from all over the state. 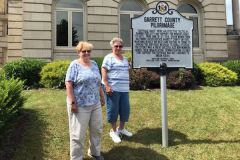 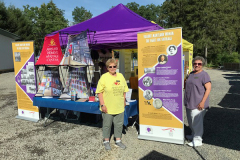 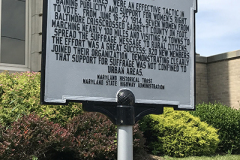 Read about the Valiant Maryland Women from Garrett County here. The Western Maryland suffrage movement is also remembered by a historical marker that stands today the Garrett County Courthouse grounds.

Mountain Lake Park was founded as the second Chautauqua resort in the United States in 1881. For years now, travelers have come together there for each summer for cultural, spiritual, and recreational activities.