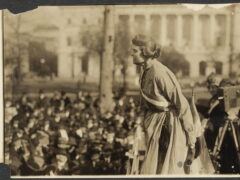 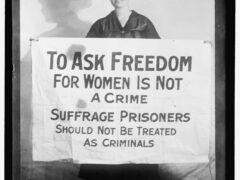 Born in Virginia and raised in Baltimore, Branham was a leader of the National Women’s Party (NWP). She was arrested picketing the White House in 1917, serving two months in the Occoquan WorkhouseOccoquan Workhouse and District jail. She played a prominent role in the Lafayette Park demonstrations of 1918 and was part of the “Prison Special” tour of 1919, traveling the country talking of her imprisonment, often in prison garb. She lobbied for equal rights in Switzerland and for the Equal Rights Amendment in the U.S., as part of the NWP Congressional Committee. See this Library of Congress biography to learn more about her lifelong advocacy for suffrage.