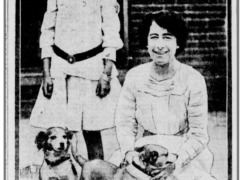 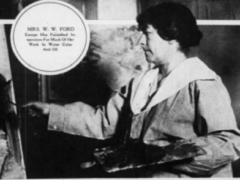 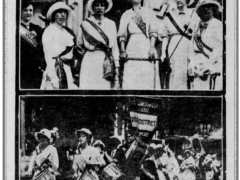 Louisa Wright Neilson was born in Priestford (Harford County) in 1865/66.  At the time of her birth, her parents, Albert and Louise (Wright) were living on or near Albert’s family farm along Deer Creek. The young family didn’t stay long in Harford County.  By 1880, they were living in Baltimore City where her father was in manufacturing.

Despite the fact that information about Louisa’s younger years is lost to history, it is evident that she was a talented artist and was well educated and well travelled.

After a trip to Germany in 1896, she was employed as the drawing teacher at Miss Carrington’s School for Girls in Baltimore City.  Several years later, in 1900, she held the same position at the newly opened Arundel School for Girls.

In 1901 Louisa married Dr. William Webber Ford, a graduate of Johns Hopkins Medical School. Ford was a noted professor of Bacteriology and Hygiene at Hopkins. The couple had a daughter, Dorothy, in 1903.

Louisa was passionate about animals and worked throughout her life supporting animal welfare organizations. That passion landed her in the back of an Elkton police patrol wagon in 1903.

In 1910 she was elected the recording secretary for the newly incorporated Animal Refuge Association. Perhaps one of her most well known actions is associated with Goliath, the hero of the Great Baltimore Fire. When the horse died, the Baltimore City Fire Board had no funds or means to afford Goliath a burial site. Instead, they thought that they would just send him to a glue factory. Louisa could not stomach the idea of the iconic Baltimore horse having such an ignominious end. She quickly rallied her fellow animal lovers and found a site at Stoneleigh Villa where he was buried with honors.

Louisa was also passionate about women’s rights and was a member of the Just Government League (JGL). She served as the Chairperson of the Baltimore Delegation that marched in the New York Suffrage Parade in May 1913. A year later, Louisa also marched with the JGL in the Washington DC Suffrage Parade. In 1916, she attended Baltimore’s first Suffrage School where she learned how to organize, protest, and speak from National Woman Suffrage Association (NWSA) experts.

Louisa never gave up her passion for art. A member of the Baltimore Watercolor Society, she was considered one of Baltimore’s premiere watercolor artists. In addition, she served as teacher and mentor to others in the city including fellow suffragist Clara Turnball Waite.

Louisa died in Salisbury, Maryland in 1931. She was laid to rest at St. Thomas Protestant Episcopal Church in Garrison Forest.

Additional note: Louisa’s paternal grandfather, James Crawford Neilson (1816- 1900), was a prominent Baltimore architect. He designed a number of notable Baltimore buildings including the B&O Railroad’s Camden Station and Clifton Mansion. Closer to home, he designed the clock tower at the Churchville Presbryterian Church.

Suffrage Rookies on the Stump, The Baltimore Sun, November 16, 1916

Suffragettes March to the Capitol, The Evening Sun, May 4, 1914