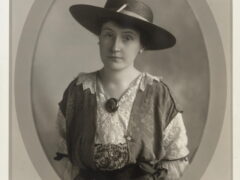 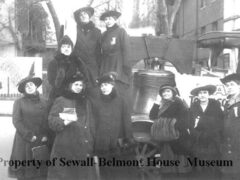 By Judy A. Carbone, President of AAUW-Garrett County Branch and a volunteer with Maryland Women’s Heritage Center

Listen to Ms. Carbone tell this story at Ballots & Beyond, a podcast collaboration project with Preservation Maryland and the Maryland Women’s Heritage Center.

Travelled from Baltimore throughout the US to fight for suffrage

Edna Story Latimer was born in Baltimore, Maryland, in 1878. She was a staunch suffragist involved in campaigning against President Wilson and national anti-suffrage candidates, as well as one of the organizers of the Maryland Just Government League.

Edna was proud of the work of Maryland suffragists to be visible throughout the state at major community events. One of the activities that influenced her later work was welcoming “General” Rosalie Jones and her suffrage pilgrims to Maryland during their hike from New York to Washington, D.C. for the 1913 Woman Suffrage Procession.

Two years later, Edna and other Maryland suffragists organized their own suffrage hikers on several pilgrimages throughout Maryland in a horse-drawn covered wagon adorned with “Votes For Women” flags. She came to be called “General” Latimer for her role in leading the hikes.

Just before noon on June 13, 1914, General Latimer led a small but determined contingent of pilgrims, marching from the Baltimore headquarters of the Just Government League to Camden Station, where they boarded a train to Cumberland, Maryland. Upon arriving, they immediately walked to Frostburg to hold their first mass meeting of the pilgrimage. After meetings in Lonaconing and Cumberland, early on June 16, they left Frostburg with knapsacks, banners, bugle and drum to begin a 13-day campaign through Garrett County. General Latimer marched at the forefront, carrying a suffrage banner.

Several members of the local chapter of the Just Government League acted as guides over the mountain to Grantsville, 12 miles west, where they rested for the night. Their 125-mile itinerary was planned by seasoned professional organizer Lola Trax who limited daily marches to 15 miles. The hikers plan was to walk easily and stop frequently to talk to the farmer folks, as the hikers called them, who would not go to a suffrage meeting.

They spoke with citizens along the way and held a total of 21 public meetings at their various stopping places. The hikers were very grateful for the hospitality afforded by the citizens of Garrett County, while the farmer folks spoke highly of the cheerful, good natured, and hopeful ladies who visited their neighborhoods.

Their march ended in Cumberland on Sunday, June 28, and the local press took note of their sunburns and sore feet. Nevertheless, they planned a similar hike through Allegany County to start on August 1 of that year.

General Latimer reported that their meetings attracted a total attendance of 6,102 citizens; they distributed 6,660 pamphlets and sold 303 copies of the “Suffrage News” along with 100 postcards depicting the hikers. 820 new members were enrolled in the Just Government League, including four women who expressed interest in joining the local Board and creating an organization in their own neighborhoods.

All this was accomplished at a cost of $130. The Oakland Republican newspaper reported that “in the history of suffrage work in Maryland, the Garrett County hike breaks all records for cheapness and practical results.”

Further evidence of the campaign’s success appears in the backlash it created among opponents of suffrage. By mid-July 1914, the Maryland Association Opposed to Woman Suffrage had received a barrage of letters from Garrett County, asking for help to counteract the hikers’ invading the county and arousing the populace in favor of women’s right to vote. Anti-suffrage literature was quickly dispatched from Baltimore, and opposition meetings were planned for Oakland and Mountain Lake Park. Clearly feeling threatened by the Just Government League’s success in recruiting 820 new members, the “Antis” took solace in what they perceived as a potential numerical advantage among the 20,000 citizens of the County.

General Latimer wrote an article for the “Suffrage News” about her hikes through Western Maryland. In it she said:

“Why do you hike?” is a question I was often asked. This form of reaching the people in every part of the State has become very popular with suffragists ever since Rosalie Jones took her first memorable trip. It brings us in such close touch with individuals, stopping as we do along the road to give literature to the farmers and their wives, and, wherever there is a small settlement, urging the inhabitants to gather in a convenient place and listen to the gospel of votes for women.

Later that year in September 1914, General Latimer left Washington, D.C. as an organizer for the Congressional Union for Woman Suffrage appointed by Alice Paul and traveled to Kansas City, Kansas. During her first week in Kansas City campaigning against Democratic congressional candidates, she shared a podium with Teddy Roosevelt at a rally of 3,000 people.

The next year, the Congressional Union for Woman Suffrage sent General Latimer and other organizers into all states to plan conventions and establish state branches, despite objections from the National American Woman Suffrage Association.

Fighting for women’s suffrage was a tiring endeavor. In February 1917, Enda left her home in Baltimore to visit her son, Alfred, who worked on a ranch in Arizona. After visiting Alfred, she decided to continue westward. She told friends that she wanted to settle in a state that allowed women to vote, and Edna decided on California.

After years of fighting the fight, she never got to see the 19th Amendment passed. Edna Latimer passed away suddenly in May 1917, after sustaining severe burns when her San Francisco hotel caught fire.

** An additional biography of Ms. Latimer can be found on the Online Biographical Dictionary of the Woman Suffrage Movement in the United States and appears here by courtesy of the publisher, Alexander Street.

By Abhi Setlur and Jessica Stein, Undergraduates, University of Maryland

Edna S. Latimer, of Baltimore, Maryland, was a suffragist involved in campaigning against President Wilson and national Democratic candidates. Latimer was part of the first group of Congressional Union organizers sent to partake in a political campaign.

In 1914, Alice Paul announced that the Democratic party was intentionally blocking a federal suffrage amendment, and outlined a proposed election program against them. Paul and her backers raised more than seven thousand dollars to meet the expenses of this campaign, and then selected organizers to be sent to the nine states where women were enfranchised.

On September 14, 1914, Latimer left Washington, D.C. as an organizer for Congressional Union for Woman Suffrage and traveled to Kansas City, Kansas. Once in Kansas, she began to campaign against Democratic congressional candidates. The goal was to make women’s suffrage a major political issue. During her first week in Kansas City, Latimer shared a podium with Teddy Roosevelt at a rally of 3,000 people.

From April through December 1915, the Congressional Union for Woman Suffrage sent organizers, including Latimer, into all states to plan conventions and establish state branches, despite objections from the National American Woman Suffrage Association. Latimer served in Maryland and Delaware during this period. From August to October 1916, Latimer lobbied for a federal woman suffrage amendment, and vehemently opposed Democratic Party candidates in Nevada.

Latimer left her home in Baltimore in February 1917 to visit her son, Alfred, who worked on a ranch in Arizona. After visiting Alfred, Latimer decided to continue westward. She told friends that she wanted to settle in a state that allowed women to vote. She decided on California.

Latimer passed away suddenly in May 1917, after sustaining severe burns when her San Francisco hotel caught fire.

A Woman’s Crusade: Alice Paul and the Battle for the Ballot by Mary Walton, p. 104, details Latimer speaking at the Congressional Union.

“The Detailed Chronology, National Woman’s Party History” was found through the Library of Congress website at: https://www.loc.gov/collections/static/women-of-protest/images/detchron.pdf

The information gathered about her final travels out west, and her death came from The Baltimore Sun, May 4, 1917