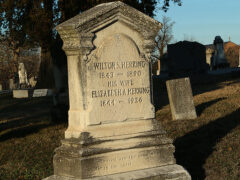 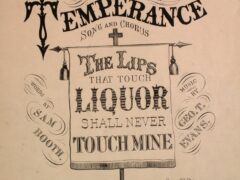 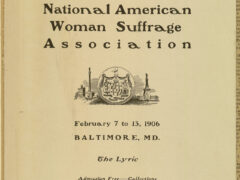 Elizabeth Herring lead the campaign for both temperance and suffrage

During the 1860s, Lizzie Chalk married Wilton S. Herring, a freight agent for the Northern Central Railway (NCRR). He worked at three stations in Maryland throughout his career at NCRR: Calvert Station, Jackson’s Wharf Station, and Canton Station. The Herrings had three children: Laura, Florence, and Willie. Elizabeth Herring resided on Gittings Avenue near Govanstown, Maryland, in Baltimore County for most of her adult life. In February 1890, Wilton Herring died suddenly, leaving her a widow.

Elizabeth Herring was especially active in the Baltimore County Woman’s Christian Temperance Union (WCTU), where she was a member of the executive committee. She also served as a Baltimore County delegate at several national conventions between 1892 and 1908. Herring personally advocated for prohibition of the manufacture and sale of cigarettes in addition to the prohibition of liquor traffic in 1894. She was elected the superintendent of the White Ribbon Herald, a WCTU newsletter, at the 24th Annual WCTU meeting in Baltimore County. The white ribbon, meant to symbolize purity, was the badge of the WCTU and was featured on the union’s logo.

One of Elizabeth Herring’s most important accomplishments was her foundation of the Era Club of Baltimore County in 1893 per the request of the National American Woman Suffrage Association, of which she was a member. The Era Club was a suffrage club for women, an acronym of sorts standing for equal rights association. Herring served as president of the Era Club until at least 1906.

In her lifetime, Elizabeth Herring faced two horrific experiences involving fire. In 1894, Herring’s barn was struck by lightning and the house kitchen caught on fire when the charge traveled along the electric wire. The fire was extinguished quickly without much damage. However, in 1901, a frame stable on her property in Govanstown was allegedly set on fire by two young boys playing with matches. The building was destroyed, and Herring blamed the loss on the county’s fire alarm telegraph, which she claimed was broken. The county commissioners decided that there was nothing to be done in regard to the complaint.

In her later years, Elizabeth Herring lived with her daughter, Laura Herring Anderson, and her family. Herring died on June 26, 1926, in Baltimore City. She was buried alongside her husband at Loudon Park Cemetery.