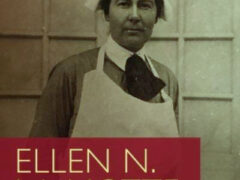 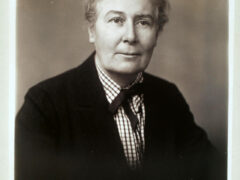 Ellen N. La Motte was the author of seven books and dozens of articles on nursing, social reform, suffrage, World War One, and the opium trade. She was the daughter of Ferdinand Fairfax La Motte and Ellen Newbold, originally from Pennsylvania, and was born in Louisville, Kentucky in 1873 and died in Washington, D.C. in 1961. In the early 1890s, the family left Kentucky after her father experienced business difficulties, and La Motte went to live with her cousin, Alfred I. du Pont, in the Brandywine valley of Delaware where she stayed until applying to the Johns Hopkins Training School for Nurses in 1898. After graduation in 1902, she was employed as a nurse in Baltimore, Italy, and St. Louis between 1902 and 1905, before taking a position as a tuberculosis nurse for the Instructive Visiting Nurse Association of Baltimore in 1905 and then in 1909 beginning work with the Tuberculosis Nurses’ Division of the Baltimore Health Department. In 1910, she was named the Nurse in Charge of the division and was the first woman to occupy an executive position in the city’s Health Department.

After 1909, she became actively involved with the suffrage campaign and often gave talks in Baltimore and the region. On February 16, 1910, she was part of a large group that went to Annapolis to present the Woman’s Municipal Suffrage Bill before the Committee on Elections. La Motte gave a short speech titled “Tuberculosis and Improved Sanitation,” tying as she often did the vote to improved public health. She augmented her efforts beyond speaking when she served as an election observer in September of 1910, going to a polling station at 1101 Pennsylvania Avenue in the Thirteenth Precinct in the Seventeenth Ward where she was the first woman in Maryland to have an official role in an election. In June 1912, La Motte was the chief marshal of a suffrage parade in Baltimore and marched alongside Dr. Anna Howard Shaw, the president of the National American Woman’s Suffrage Association. She also took the skills she had developed as a writer in her nursing career and applied them to the campaign for the vote: she served as a representative for the Just Government League of Maryland on the editorial board of The New Voter, published in ten issues from November 1910-May 1911, and then in January 1913, was a contributing editor for the Maryland Suffrage News.

She left Baltimore in June 1913 and reported on the militant suffrage movement in London as a “special correspondent” for the The Baltimore Sun from July through September 1913; in these articles she covered trials, rallies, and the conflict stirred up by the movement. She left London for Paris in the fall of 1913 where she hosted Mary Richardson, a militant suffragette who slashed Velázquez’s Rokeby Venus in March 1914, when she was recovering from illness; she also occasionally had lunch with Christabel Pankhurst, daughter of Emmeline Pankhurst, founder of the Women’s Social and Political Union. Her interest in suffrage would be overtaken by the outbreak of World War One, when she would nurse in a French military hospital periodically from 1915-1916, after which she left for Asia for a year, which launched her two-decade career an an anti-opium crusader. With the onset of the Great Depression, she moved back to the United States and took up residence in Washington D.C. Her friend Florence Bayard Hilles, who was an important member of the National Woman’s Party from its earliest days, convinced her to serve as Chairman of the House Committee of the NWP. In that capacity, she was involved in restoring the Sewall-Belmont house in the late 1930s.

A photograph of La Motte can be found online at the homepage for the “Ellen N. La Motte Collection,” The Alan Mason Chesney Medical Archives of the Johns Hopkins Medical Institutions: http://www.medicalarchives.jhmi.edu/papers/lamotte.html.