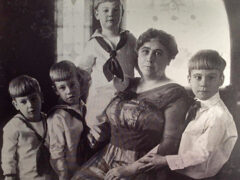 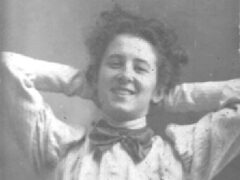 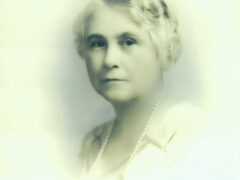 Frances Nelson was born in Toledo, Ohio in 1880. After losing her mother when she was only a year old, she lived with her father’s family. The Nelsons, as she described them in her memoir, A Little Girl Goes Barnstorming, were “troopers” and travelled as the “Andrews Dramatic Company.”  Frances began performing with them at the age of four.

After spending six years on the road, the family settled in Butte City, Montana where she attended school. By the age of 18, she was in Manistee, Michigan where she worked with two other women to publish the Salt City Voice, the first weekly newspaper ever promoted by an all-woman staff.  Frances was later the society editor for the Detroit News Tribune.

In 1902, Frances switched careers and moved to New York where she worked in the advertising industry. In New York, she joined the Woman Suffrage Party. Frances put the speaking skills that she had developed as a child actor to teach public speaking courses for Brooklyn suffragists who feared that they were “not yet an expert in talking on her pet subject.”

In 1910, Herbert A. Wagner of Consolidated Gas and Electric of Baltimore recruited her to start the advertising department for his company. Once in Baltimore, she quickly became affiliated with local suffragists and became a speaker at Just Government League meetings.

At Consolidated Gas and Electric, Frances met Richard Tillman, manager of the company’s business department. In December of 1910, the two married. After Frances was married, she gave up her career in order to stay home and raise a family. The couple settled in Towson and  had four sons. A prolific writer, she detailed the hectic life of a young mother in her self-published autobiographical sketches.

Despite  Not only did she serve as publicity chief, she was also the editor-in-chief of their monthly publication The Woman Suffrage Bulletin.

Once the 19th Amendment was finally ratified, the Baltimore Sun reported that Frances was among some of the first women to register to vote.

Frances remained active in community organizations her entire life. She led Parent-Teacher Organizations, was Vice President of the Public School Association, a founder of the Towson’s Woman’s Club, and organized the drama group, “The Footlighters.”

Frances died in her RIderwood home at the age of 76.  She was laid to rest at Loudon Park Cemetery.