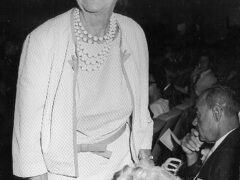 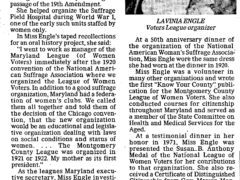 Born in Montgomery County, Maryland in 1892, Lavinia Margaret Engle was a suffragist and social activist, a graduate of Antioch College, and World War I volunteer in France. She served as field secretary of the National American Woman Suffrage Association (NASWA) from 1923 until the ratification of the Nineteenth Amendment to the U.S. Constitution granting women the right to vote.

Engle was a founder of the Montgomery County League of Women Voters in 1920, and she served as the first Executive Secretary from 1920 to 1936. At the state level, she lobbied for legislation to assist women and children. She supported the establishment of a state department of infant and maternal hygiene, the Juvenile Court Act, and the reorganization of the Board of State Aid to Charities.

In the early and mid-1920s, Engle served as field secretary for the state League of Women Voters. In that capacity she, frequently at Governor Albert C. Ritchie’s request, sent names of women for various government appointments. The governor did not always accept Engle’s recommendations, but on those occasions usually felt compelled to explain his actions. After one such episode, Engle responded, “In spite of my suggestions for appointments, I am sending you a few more.”

Ritchie’s agenda of an expanded and more powerful state government and that of white women activists joined at several points. Together they developed a relationship that helped them achieve their objectives. Ritchie sought a larger role for Engle, and he came to depend on her to serve as the voice of Maryland women.

In November 1923, Ritchie informed Engle that he would return in December from a trip with his cronies to French Lick Springs, and concluded, “Why don’t you come out with us? You are a real politician, and all real politicians go there.”

For many years, activist women had been political actors, working with and drawing closer to traditional politics and politicians. Women had been politicians for years, even if they didn’t recognize or accept it, since politics were in their view cesspools of male politicians’ corruption. Many activists, however, including Lavinia Engle, both realized and welcomed this recognition. Ritchie’s symbolic acceptance of women as politicians drew them and their issues into a closer relationship with his priorities and methods.

In 1933, President Franklin D. Roosevelt appointed Lavinia Engle to the Social Security Board, and she served as Chief of Field Operations. She was responsible for organization of the new organization’s regional and district offices.

Lavinia Engle died in 1979, and she was inducted into the Maryland Women’s Hall of Fame in 1989.