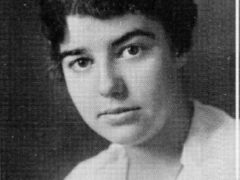 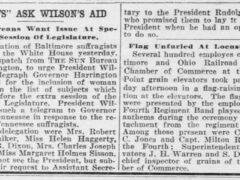 Margaret Holmes Sisson was born April 27, 1894. Her parents were John Baird Sisson and Matti V. Wrenn. She had three brothers and one sister.

She attended Bryn Mawr Preparatory School in Baltimore before matriculating at Goucher College in 1912. At Goucher her fellow students teasingly wrote that “when Margaret came to college she came with the idea of doing good work, but not doing one other thing.” At Goucher she became involved in the College Equal Suffrage League and was appointed organizer to the first district in East Baltimore. She graduated from the college in 1916.

On January 14, 1917, Margaret participated in a “Maryland Day” suffrage picket outside the White House organized by the Congressional Union. On March 3, 1917, she, with members of the Just Government League and students from Goucher College, returned to Washington D.C. for another picket. A newspaper quoted Margaret as proud to do her “bit.”

On April 15, 1917 Margaret made a third trip to the White House as part of a delegation of Baltimore suffragists petitioning President Wilson to telegraph Maryland Governor Harrington an appeal for including women’s suffrage in the upcoming session of the legislature.

After the start of World War I Margaret went to work as a stenographer for the Expeditionary Depot in Baltimore. In 1918 she began work as secretary to the secretary of the Mercantile Trust & Deposit Company in Baltimore.

She married Dr. Thomas Chambers in 1922 after the death of her sister (his former wife) Martha in 1919. They raised three children: one son and two daughters. Her daughter, Margaret Virginia Chambers, followed in her mother’s footsteps and graduated from Goucher College in 1944.

Margaret died in November 1983 having lived in Baltimore her entire life.