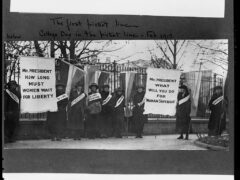 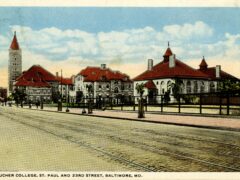 Joined Goucher College classmates to picket the White House in 1917

She attended Goucher College only briefly during the academic year of 1916-1917. Helene was one of the several Goucher students who traveled to Washington D.C. on a cold February morning in 1917 to demonstrate at the White House in support of women’s suffrage. In January 1917, the National Woman’s Party (NWP), began picketing in front of the White House. These pickets stood silently with banners and flags at the White House gates for six days a week, most weeks during 1917 and at key times during 1918 and 1919, until the 19th amendment passed Congress in June 1919.

To encourage the participation of college women, the NWP planned College Day in February 1917, which brought together suffragist students from thirteen colleges, to rally support for suffrage and demand action from President Wilson.

Helene, among thirty Goucher students, joined the other suffragists on the cold Saturday morning. Even though Goucher President William Guth publicly denounced the students who picketed, the Goucher students were thrilled to have gone. In a sympathetic Baltimore News article written on February 6, 1917, Mrs. Townsend Scott, the chairman of the Maryland branch of the NWP, explained that the picketing “strengthened [the women’s] resolve and, furthermore, would encourage others to join the movement.”

Much of Helene’s life outside of Goucher is unknown. She married William Schaff Davis Jr., a mining engineer, on June 16, 1928. The couple had one son, William Schaff Davis III. Mrs. Davis died on September 29, 1987 and was buried at the Mount Lebanon Cemetery in Pennsylvania.

Helene’s years at Goucher and specifics about her birthplace and family were found in her Individual Alumni Record (Special Collections and Archives, Goucher Library). Information about the picket was found in The Suffragist (Archives, National Woman’s Party/Belmont-Paul Monument), the National Woman’s Party Papers (Library of Congress), the Baltimore News (Enoch Pratt Library), and newspaper clippings from Public Relations Scrapbooks in Special Collections and Archives at Goucher College.

Information about Helene’s family was found through Ancestry.com. Details about her husband were found from their application for a marriage license. Records of Helene’s death and her son can be found through findagrave.com.