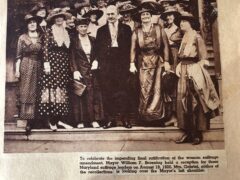 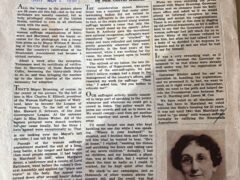 Jane Miller Gabriel was born in Baltimore in the early 1870s, daughter of Victor Miller. The 1910 and 1920 censuses of Baltimore note her husband, Calvin N., a doctor, and confirm the statement in her 1958 newspaper story that she had no children. There also has been no found information about her upbringing or family life.

Jane Gabriel was one of the lobbyists in the year 1916 who was in the White House. Mrs. Gabriel accompanied by the other lobbyists, were the first to bring in the constitutional amendment for full suffrage to both the House and Senate’s attention. This meeting was the final time that a state amendment was asked for.

During the following year, 1917, Mrs. Gabriel played an important role in the Just Government League. She was a part of the eighth Annual Convention of the Just Government League in 1918. The Just Government League of Maryland was founded by Edith Houghton Hooker in 1909. It was created with the intention of renewing interest regarding the issue of women’s suffrage. Edith, within the years, became more involved and began working with Alice Paul in the year 1914. Alice Paul was running the Congressional Union at this time along with Lucy Burns. Then, in 1915, Edith was elected as the “finance chairman for the executive committee at the first National Convention of the Congressional Union.” Soon after, she began writing for The Suffragist (founded by Alice Paul) and held office in the National Woman’s Party.

This was the link that Mrs. Calvin Gabriel had, being a fellow suffragist sister to Alice Paul. Mrs. Gabriel also wrote articles for The Baltimore Sun. Later on in her life, in The Baltimore Sun, there was an article mentioning Mrs. Gabriel published on April 10, 1932. The author, Betsy Patterson, states that during this time, Mrs. Calvin Gabriel was the vice chairman of the Republican State Committee of Maryland. With this title, she was one of the few people present at a luncheon hosted by the League of Republican Women at the Willard Hotel. The First Lady, Mrs. Hoover, was the guest of honor there. Specifically on November 2, 1958, Mrs. Gabriel wrote another Baltimore Sun article, The Fight For Woman Suffrage. In this, she writes about the struggle that suffragists mounted to win suffrage in Maryland.

“I feel as though I might be standing near Vesuvius with lava flowing, or that some other thundering thing might be happening, for I can’t come to the full realization of the glorious news that has come to us today. I will not say for whom I will vote in the fall election.”

Jane Miller Gabriel, reflecting in the Baltimore Sun about the passage of the 19th Amendment.