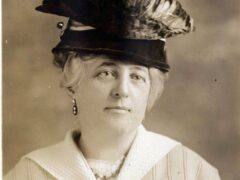 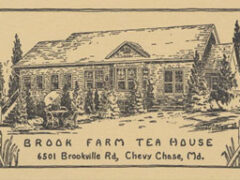 Minnehaha Brooke known as “Minnie”, of Chevy Chase, Maryland, was a woman of many passions. She was an ardent suffragist who worked for many years for the National Women’s Party as a suffrage speaker, traveling throughout the country and organizing meetings for women’s rights. In 1913, she worked with Alice Paul and others to plan the first Suffrage Parade in Washington, D.C.

Minnie also owned the Brooke Farm Tea House, located in Chevy Chase. In addition to managing the restaurant, she hosted lectures, meetings, and luncheons for local suffrage group. But her biggest business venture was as a publisher of postcards. Her postcards were primarily views of Washington, D.C., and surrounding area.

In the 21st century, we post photographs of our daily life and the places we’ve traveled to (or aspire to) on Facebook and Instagram. In the 20th century, long before social media was invented, photographs were posted in the mail on postcards. Postcards are still published and mailed, of course, but starting in about 1900, the sending of postcards became an international craze, and were sent out by the millions. They were colorful, fun, and inexpensive. At a time when telephone calls, especially long-distance calls, were quite expensive, postcards could be purchased for a penny, and mailed for another penny nationally, or two pennies, internationally.

Minnie was an “early adopter” in postcards, starting her business in 1900. For the first two decades of the 20th century, she published hundreds of images taken by local photographers. She went into business to make money, obviously, but over the years her photos have become a documentary history of Washington, D.C., Maryland, and Virginia in the early 20th century. The exterior views show the buildings, streets, and landscapes. Interior shots show clothing, interior design, and technologies such as telephones and electric lighting. They are invaluable to historians.

Minnehaha Brooke, suffragist and entrepreneur, was quite an inspirational woman. And that’s quite a hat she is wearing.