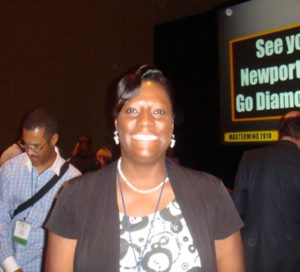 My name is Sandra Pearsall from Baltimore City. I have a true success story of my own.

I am a 39 year old black female born and raised in Baltimore City. I come from a broken home with a long list of family problems. I attended public schools. My family and I lived from house to house and many times the houses was not even fit for living. There were times we did not have heat or electricity. I knew as a child this was not the way I wanted to continue to live. I had a dream and never gave up on it.

I faced even more obstacles as a teenager. I was living on my own from age 17. Even though I was an above average student I did not graduate high school.

I did not let that stop me. I had nothing. No money, no job, and no direction to go.

I decided that I need to make some major changes. I found a little fast food job where I worked hard from sun up to sun down. I was making $3.95 per hour, just a little above minimum wage. I knew even at that time I was at a dead end job. I continued to work hard for over the next 10 years.

In the year 2002, I really decided I wanted more out of life than working hard just to have no money at the end of the week. I started my research on real estate investing. Shortly after I was able to purchase 14 houses. I built my dream home in 2006.

Just on a part-time base I was able to increase my income more than any raise I would get from my job. My properties now bring in a yearly salary of over $110,000 per year. My rental income exceeds my total debt. I was able to quit my job at the age of 34. In 2006, I was awarded National Real Estate Investor of the year by George Ross, Donald Trump Mentor.

Real Estate has changed my life. I still remember the night waking up about 3 am, looking up at the ceiling saying to myself I have to do something to improve my life. I was tired of working so hard. I was tired of my employers telling me what I’m worth. I was tired of not spending time with the family. I was just tired of being tired. I do strongly believe that when you reach a certain point of being sick and tired. That’s when you will take action.

Investing a few hours a week in my spare time I was able to gain financial freedom.

What I have learned I want to pass along to motivated people just like myself. In order to be successful we first have to change our ways of thinking. If you live in a negative environment it’s not hard to develop a negative attitude. The downfall is a negative attitude leads to negative results. No matter how bad things may seem to be, keep a positive attitude to have a positive result in the end. I tell everyone If I can do it anyone can and I mean that from the bottom of my heart. To even personalize my story I was raped at 16 and it landed me pregnant. A few months later I had a miscarriage. It was like I was destine to fail. Faith and Belief kept me going. God has been good to me.

Even if it’s not real estate, focus on your future. It’s never too late.