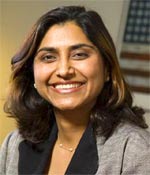 The Spirited Women of Baltimore awards named Sheela Murthy the Spirited Woman of 2010, celebrating an accomplished, spirited woman who acts as an example, leader and mentor in her community and profession. Sheela Murthy grew up in poverty in India, and studied law against her parent’s wishes. She moved to the United States in the 1980s and graduated from Harvard Law School. After practicing with major law firms in New York and Baltimore, she founded Murthy Law Firm, one of the world’s premier U.S. immigration law firms. (A liaison office is located in Chennai, India.) She is also sought after as a motivational speaker for her passion and unique perspectives on life as an immigrant, minority woman, and business leader.

Murthy believes in giving back to the community. She has been involved with a number of organizations, including the American Immigration Council, Girl Scouts of Central Maryland, Jhpiego, and Stevenson University, and is active at the leadership level of the United Way of Central Maryland and United Way International. She and her husband have also started their own nonprofit organization, the MurthyNayak Foundation, to give to a range of projects in India and the United States.

She has received many awards and honors from the Baltimore Business Journal, The Daily Record, SmartCEO magazine, and other organizations, and was the recipient of the prestigious “Ernst & Young Entrepreneur of the Year in 2009” award. She was also named the “2009 Philanthropist of the Year” by United Way Central Maryland.