Honorary Board of Directors

The Honorary Board of the Maryland Women’s Heritage Center is made up of renowned Maryland women, many of which are “firsts” and “founders.” 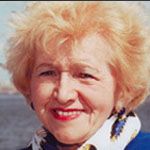 (1923-2016)
Former Congresswoman and First Woman Director of the U. S. Maritime Commission

The Honorable Helen Delich Bentley has focused her career both on the advancement of America’s industrial/manufacturing base and its maritime community. In honor of her work, the Port of Baltimore was renamed The Helen Delich Bentley Port of Baltimore in 2006. That same year, Bentley served as Chairman of the Port of Baltimore’s Tricentennial Committee, which oversaw a yearlong celebration honoring the Port’s 300th anniversary. From 1985 – 1995, she served as a member of the U.S. House of Representatives, and was Chairman of the Federal Maritime Commission from 1969 – 1975. Prior to this, she was the Maritime Reporter and Editor at The Baltimore Sun from 1945 – 1969. <a href=”http://bioguide.congress.gov/scripts/biodisplay.pl?index=B000392″>Click here</a> for more information about Helen Delich Bentley 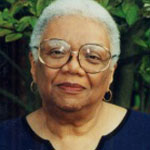 Lucille Sayles Clifton was an accomplished and nationally-recognized poet and author.  Her family has inspired her writings, and her early poems are celebrations of African-American ancestry, heritage and culture.  At 16 she entered college at Howard University in Washington, D.C. where she met Sterling A. Brown, A.B. Spellman, Chloe Wofford (Toni Morrison) and Fred Clifton, whom she married in 1958.  Like her poetry, Clifton’s short fiction extols the human capacity for love, rejuvenation, and transcendence over weakness and malevolence.  Clifton served as Poet Laureate of Maryland from 1979-1982. Her other achievements include fellowships and honorary degrees from Fisk, George Washington University, Trinity College, and other institutions; two grants from the National Endowment of the Arts; and an Emmy Award from the American Academy of Television Arts and Sciences.  Clifton was Distinguished Professor of Humanities at St. Mary’s College in Maryland.  She was the proud mother of six children. 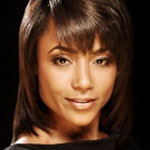 Dominique Dawes is best known for her tremendous success as an Olympic gymnast who competed in three Olympics, won three medals and has a permanent place in the U.S. Olympic Committee Hall of Fame. Throughout her career, Dawes has won more National Championship medals than any other athlete, male or female, since 1963, as well as numerous World Championship medals. One of Dawes’ greatest feats came when she swept all four events and won the All Around title at the 1994 National Championships. She is much more than a champion gymnast, though. After retiring from the sport to which she dedicated 18 years of her life, Dawes has found a new passion empowering others. She is an accomplished motivational speaker, speaking to audiences on topics focusing on passion, leadership, teamwork, health, fitness and wellness. She also hosts gymnastics clinics, has served as a spokesperson for multiple local and national campaigns, including as President of the National Women’s Sports Foundation, and most recently, traveled to Beijing, China, as a media analyst for the 2008 Summer Olympics. <a href=”http://www.dominiquedawes.com/”>Click here</a> for more information about Dominique Dawes. 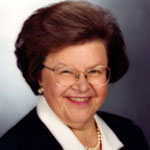 The Honorable Barbara A. Mikulski has served as U.S. Senator since 1986, when she became the first Democratic woman to be elected to the U.S. Senate in her own right. As the most senior female Senator, she is the Dean of the Women, serving as a mentor to other women Senators when they first take office. Senator Mikulski was major sponsor of the legislation to establish March as National Women’s History Month. Mikulski represented Maryland’s third district in the U.S. House of Representatives from 1976 – 1986, and was a Baltimore City Council member prior to that appointment for five years. She grew up in Highlandtown, Baltimore City, and worked as a social worker. <a href=”http://mikulski.senate.gov/”>Click here</a> for more information about Barbara A. Mikulski. 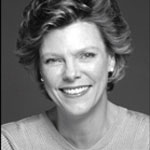 Bestselling author Cokie Roberts has penned two <em>New York Times</em> bestsellers, <em>We Are Our Mother’s Daughters</em>, and <em>From This Day Forward</em>, which she co-wrote with her husband. She has also written <em>Founding Mothers: The Women Who Raised Our Nation</em> and <em>Ladies of Liberty: The Women Who Shaped Our Nation</em>.

She is a political commentator for ABC News and serves as senior news analyst for National Public Radio. From 1996 to 2002, she and Sam Donaldson co-anchored the weekly ABC interview program <em>This Week</em>. In addition to broadcasting, Roberts, along with her husband Steven V. Roberts, writes a weekly column syndicated in newspapers across the country by United Media. She has been inducted into the Broadcasting and Cable Hall of Fame, and was cited by the American Women in Radio and Television as one of the 50 greatest women in the history of broadcasting. In 2008, the Library of Congress named her a “Living Legend.” 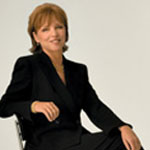 Bestselling author Nora Roberts has published more than 150 romance novels. She also writes romantic suspense novels under the pseudonym J.D. Robb for the “In Death” series. Since 1999, all of her novels have been a <em>New York Times</em> bestseller, and 124 of her novels have ranked on the Times bestseller list. She is a founding member of the Romance Writers of America (RWA), and was the first author to be inducted into the Romance Writers of America Hall of Fame. In 2007, <em>Time</em> magazine named her one of their “100 Most Influential People.” <a href=”http://www.noraroberts.com/”>Click here</a> for more information about Nora Roberts. 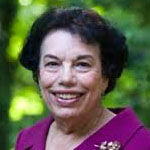 Bio
<strong>Carmen Delgado Votaw</strong>
(1934-2017)
Thank you for your service to Maryland and the Nation.

Carmen Delgado Votaw was a national and international leader in the field of civil rights, particularly promoting equal opportunities for Hispanics and women.

She retired as Senior Vice President for Public Policy from the Alliance for Children and Families, a nonprofit organization that serves over 400 agencies that provide services to children and families, at the end of 2006. Her previous job was Director of Public Policy for United Way of America where she served in the Community Impact Service Area linking public policy advocacy to community outcomes. Formerly, she was the Director of Government Relations for the 3.5 million member Girl Scouts of the USA and also served as a member of the National Board of Directors of the Girl Scouts for nine years.

Carmen served as chief of staff to U.S. Member of Congress, Jaime B. Fuster of Puerto Rico for six years. Her other previous positions, both volunteer and staff, include serving as Vice President of Information and Services for Latin America (ISLA, Inc.); President of the Inter American Commission of Women of the Organization of American States; Co-Chair of the National Advisory Committee of Women (presidential appointment); Commissioner on the International Women’s Year Commission (IWY); Federal Programs Specialist, Office of the Commonwealth of Puerto Rico, Washington, D.C.; National President, National Conference of Puerto Rican Women; former Chair of the National Coalition for Women and Girls in Education; former Chair of the Human Services Forum of the National Assembly of Health and Human Service Organizations; former member of the Independent Sector Government Relations Committee. She also served as a Trial Court Judicial Nominating Commission from the State of Maryland. She is a member of the prestigious Council on Foreign Affairs and is a Lay Eucharistic Minister at Washington National Cathedral.

Ms. Votaw is the author of a bilingual book (English and Spanish), Puerto Rican Women: Some Biographical Profiles, of biographies of Julia de Burgos and Maria Cadilla de Martinez in Notable American Women (1980), and of a chapter in To Ourselves be True. She has written a number of articles in publications such as Americas, Vision, Horizontes, Agenda Magazine, Nuestro and Graduate Woman.

Ms. Votaw has visited nearly seventy countries to speak on human and civil rights and on development and women’s issues and has participated in countless international fora of governmental and non-governmental organizations including five United Nations World Conferences on Women (Mexico, Denmark, Kenya, Beijing, New York).

She has been honored by a number of organizations, including receiving the Hispanic Heritage Award for Education in 1996, a Civil Rights Award from the National Space Agency (NASA), the U.S. Marshals Service, the Instituto de Puerto Rico of New York, the National Institute for Women of Color, Hispanic USA Magazine, Federally Employed Women (FEW), the National Conference of Puerto Rican Women, MANA’s Las Primeras Award, the National Cuban American Women’s Association award and the 1991 National Council of Hispanic Women’s Outstanding Achievement Award. She was inducted in Maryland’s Women’s Hall of Fame.

Ms. Votaw has a bachelor of arts degree in international studies from The American University, an honorary doctorate in the humanities from Hood College and an associate degree from the University of Puerto Rico. She lives in Bethesda, Maryland with her husband and has three children and six grandchildren.

Carmen has served on the Maryland Women’s Heritage Center Board of Directors since its inception.

Carmen Delgado Votaw is listed in Who’s Who of American Women, the International Who’s Who, Who’s Who in Latin America and in Feminists Who Changed America 1963-1975.